Some sketches done with an affordable 5" Tabletop Reflector 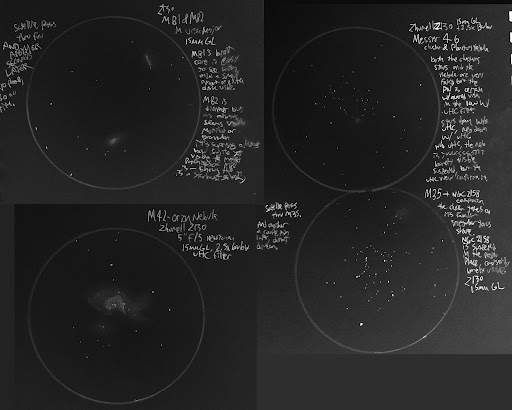 I Picked up a Zhumell Z130 for a review. It has flaws, but for the money it's absolutely terrific. A review on AstronomySource will happen eventually. For now, here's four sketches from tonight.
Post a Comment
Read more

A year of pandemic astronomy

- April 02, 2021
Something has gone horribly wrong. But we all know that. A couple weeks ago we had a set of virtual TriStar lectures, an attempt to run the TriStar amateur astronomy conference online. It worked great, though it rather lacked the social aspect found in real-life TriStars at GTCC. One year prior to TriStar 2021, we had TriStar 2020. By then we were already beginning to see how the coronavirus disease was changing our lives. We were encouraged not to shake hands and to take extra care if we were ill, but we still had the meeting, and we still had the special Saturday observing session at the Cline Observatory. I hosted in the dome that night. Next Friday was cloudy, and by the Friday after that the WHO declared COVID-19 to be a global pandemic. There hasn't been a Cline Observatory viewing session since TriStar 2020 and as of yet none are scheduled. Prior to this, I had been volunteering at the Cline Observatory since April 7th 2017. It was nearly my 3rd anniversary of getting into
Post a Comment
Read more

Straight Thru and RACI: A Powerful Duo

Tube Rings for the Orion SkyScanner 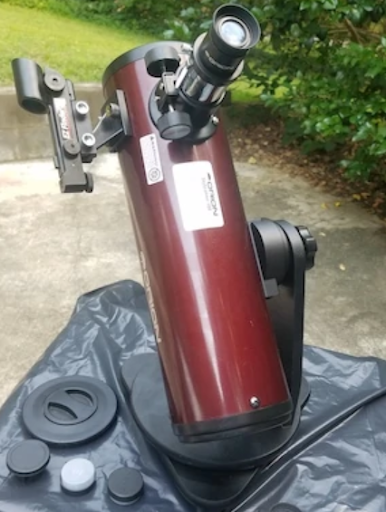 For Christmas, I bought my cousin Quinn (19) an Orion SkyScanner 100, one of the telescopes I recommend most for beginners on a budget, especially but not limited to kids. As noted in my review and pretty much any time I talk about it, the position of the red dot finder and the eyepiece is... frustrating, to say the least. The eyepiece ends up too high and the straight-thru finder too low. While teaching Quinn, how to use the telescope, we found that due to some motor disabilities she deals with, the telescope was ergonomically almost unusable. So I had to work to fix the eyepiece and finderscope problem.
Post a Comment
Read more

Let's Catch Up: The Orion ShortTube 80-A 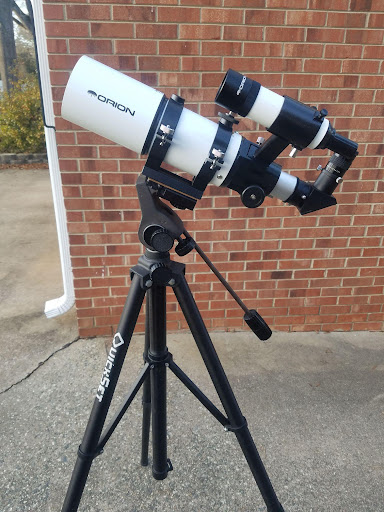 Let's catch up. Christmas, Remembering a Friend, and The Sun. For the astronomy classes at GTCC, home of the Cline Observatory I volunteer for, students must fill out an observing report. But not everyone can do night time observing, so we provide solar observing opportunities several times a semester. We use two telescopes typically, an old Meade 8" SCT (it's gotta be 25 years old or so) with a sub-aperture solar filter for white light viewing, and a Coronado PST for hydrogen-alpha viewing.
Post a Comment
Read more

Let's catch up. The Conjunction. 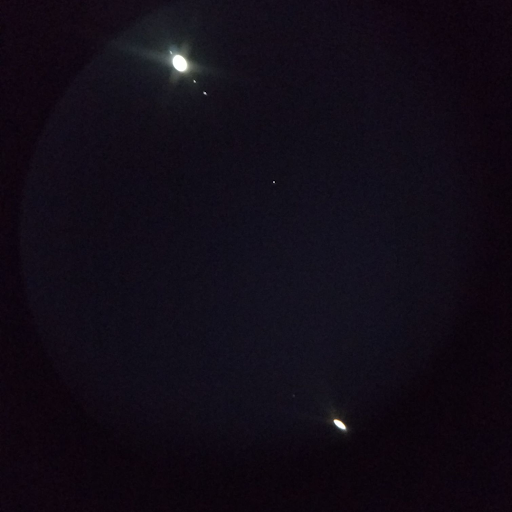 I haven't posted in a while. I think I've said this before, but after a while, the weight of everything that's happened and the fact I could never hope to keep up with it all builds up, I procrastinate more, and well, I never get around to talking about what's happened the past month or so. I must confess, I have been worse about keeping observing log records as well for the past month or so, which has contributed to this problem. And, perhaps this blog doesn't get enough readers for me to bother apologizing, but a blog isn't necessarily only for readers from the present. The Great Conjunction was over quicker than it began! I observed it the week leading up to the 21st, with both my 6" Dobsonian and the new 10" Dob. It was a thrilling sight to see them come closer and closer, and I measured their approximate separations based upon with which eyepiece they could just barely be seen together in the field of view.
Post a Comment
Read more
More posts